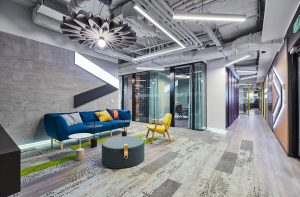 Cybersecurity breaches have been on the rise in recent years thanks to a growing number of cybergangs staging hard-hitting ransomware attacks. Accenture is the latest victim; the company announced a cybersecurity breach earlier this month which allegedly threatened the release of its sensitive data.

The LockBit ransomware gang is a Russian-speaking group of cyberhackers which target countries not formally a part of the Soviet Union. They have been active circa September 2019, and have since been responsible for thousands of global ransomware attacks. The largest of these attacks was Press Trust of India, which was hit in October of 2020, crippling the popular news agency for hours—they did not pay the ransom.

The gang announced the attack on a dark web leak site, and claimed that it has stolen six terabytes of “top secret” data from Accenture, with a demanded ransom payment of $50 million. Atlanta-based cybersecurity intelligence firm Cyble shared images of Lockbit’s official communication channel with Associated Press in order to provide insight into the attack.

Accenture did not comment on whether or not the cybercriminals were successful with their attempts, or if any data has actually been breached as a result. In a statement released shortly following the attack, Accenture assured the public that though it did identify irregular activity in one of its cyber environments, the problem was quickly isolated and contained so that it would not negatively affect any other servers.

The Dublin-based company did not provide any additional details on how many servers or how much data has been compromised as a result, and did not directly specify that the attack was ransomware. Speculation on the company’s existing comments, however, suggests that that is the likeliest case.

As of now, Accenture denies any impact being made from this ransomware, and did not acknowledge whether or not it paid any part of the ransom.