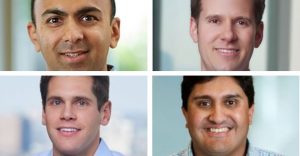 Located in Baltimore and San Diego, JMI Equity has stayed focused on helping founders and management teams in scaling their software companies. It has done so by providing growth capital as well as sound investment advice. Notably, JMI has raised over $4 billion since it was founded in 1992. Its roots are deeply ingrained in the software industry given its founding and lead backer was John Moores, the founder and former Chairman and CEO of BMC Software.

The goal of JMI is to create alignment with management teams and execute on strategies for accelerating growth, in turn building companies into industry leaders. Typical investments range from $15 to $125 million. Over the years, JMI has invested in over 150 businesses, participated in 19 IPO's, and completed over 100 exits. The firm’s portfolio includes HackerRank, campuslogic, Code42, Coupon Cabin, and bloomerang, among others.

In 2020, JMI saw four of its investment professionals named to GrowthCap’s prestigious Top 40 Under 40 Growth Investors awards list. They include:

Suken joined JMI in 2012 and is focused on investment in B2B software businesses. He has completed 11 investments and successfully exited six during his time at JMI. He is currently a Board Director at Applied Systems, Arena Solutions, HackerRank, and Lytics. He also is a Board Observer at Code42 and Seismic Software. His experience includes several other notable investments, such as Adaptive Insights (acquired by Workday), Avecto (acquired by Bomgar), Campus Logic, Internet Brands (acquired by KKR), and Intradiem.

Suken graduated from the University of California at Berkeley with a B.A. in Computer Science and a B.S. in Business Administration. He also holds an M.B.A. from Harvard Business School. He began his career as an Investment Banking Analyst in Morgan Stanley’s Financial Sponsors Group. Following banking, Suken worked as an Associate at Hellman & Friedman, where he was focused on software and digital media investments. He also worked as a Product Manager at Google, helping to build out the Google Chrome platform.

“It is an honor to join my JMI colleagues on this prestigious list of top growth investors. Building world class enterprise software companies is hard work, and it’s a privilege to partner with JMI’s current and prospective portfolio companies in this journey.” – Suken Vakil

David, who has been with JMI for more than 14 years, is focused on investing in growing software businesses across several vectors, including sales and marketing. He has completed 13 investments over the course of his career and successfully exited eight companies.

He is currently a Board Director of Businessolver, Bloomerang, Rain Focus, and Unanet. His investment experience also includes prior investments in automotive Mastermind (acquired by IHS Markit), CoreHR (Acquired by The Access Group), Intelex (acquired by Fortive), SiriusDecisions (acquired by Forrester Research), ServiceNow (NYSE: NOW), and TC3 Health (acquired by Change Healthcare).

David graduated from Emory University with a B.B.A. in Finance and Accounting. He began his career as an associate at Cascadia Capital.

“My colleagues and I take great pride in helping our portfolio companies grow and achieve their strategic goals. Partnering with talented founder-owners and management teams in building world class businesses is what makes our work so fulfilling.” – David Greenberg

Larry joined JMI in 2010 and is focused on investment in B2B software businesses. He has completed 11 investments and successfully exited seven during his time at JMI. He is currently a Board Director at Bloomerang, Higher Logic, RainFocus, and Raptor Technologies. He also is a Board Observer at Benevity and Level Access. His experience includes several other notable investments, such as automotiveMastermind (acquired by IHS Markit), Double Verify (acquired by Providence Equity Partners), and Schoology (acquired by PowerSchool).

Larry graduated from The Wharton School of Business at the University of Pennsylvania with a B.S. in Economics. He began his career as an analyst in the investment banking division of Merrill Lynch & Co.

“We’ve built our firm around partnering with founders and executives to help them scale their software businesses. I can’t think of a more fun and rewarding job. I’m fortunate for the opportunity to work with so many talented entrepreneurs.” – Larry Contrella

Sureel has been part of the JMI Team since 2010 and is focused on investment in B2B software businesses. He has completed six investments and successfully exited one company during his time at JMI. He is currently a Board Director at Healthx and Jvion and a Board Observer at PointClickCare and Clio. His experience includes several other notable investments, such as Adaptive Insights (acquired by Workday), Capsule Tech (acquired by Qualcomm), and Halogen Software (IPO; TSX: HGN, Acquired by Saba Software).

Sureel graduated from Stanford University with a B.A. in Economics and Human Biology and received his M.B.A. from Harvard Business School. He began his career in sales operations and business development at mobile software company DoubleDutch and was a business analyst at McKinsey & Company prior to joining JMI.

“Our team at JMI Equity focuses on partnering with software businesses and their leadership teams as they scale into market-leading technology companies. Software companies, at their core, are people businesses – we aim to match the passion and innovation of the teams we back with a collaborative and empathetic approach. It’s an honor to be included on this impressive list of growth equity investors, including several of my teammates at JMI.” – Sureel Sheth