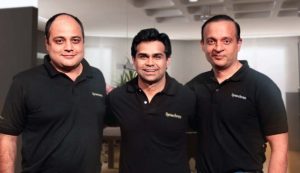 In 2001, Synechron was founded as a bootstrapped IT firm by three individuals Tanveer Saulat, Faisal Husain and Zia Bhutta. In less than two decades the startup firm has mushroomed to a fast growing corporation in large part because of its deep focus on the financial services space.

Estimates of its valuation are in the $1.2 to $1.3 billion. Notably the company earns $500 million in revenues annually and $60 to $70 million in EBITDA. Today, Synechron operates in more than 18 locations in India and globally.

When asked about the founders’ interest in cashing out, a Synechron spokesperson has this to say, “Synechron, due to its niche services for the financial services industry, lured investors and our competitors to approach us multiple times for a buyout, but our founders have always refrained,” continuing with, “We have had discussions with private equity investors but decided against a transaction.”

One of the potential acquirors is Cognizant, the well-known IT behemoth based in Teaneck, NJ. In 2018, Cognizant generated over $16 billion in revenues earning $2.1 billion in net income. It has approximately 290,000 employees and has been active acquiror globally over the years. In 2019 so far, it has acquired four companies in Ireland, Finland and the U.K.